Donald Trump lives in Washington, DC., but it’s not his town. His Party will meet there this week, but the town belongs to Muriel Bowser, the Mayor of the District of Columbia. She left her calling card on Black Lives Matter Plaza right on Trump’s Front Door. Take a look. This is what Trump sees as he gets up every morning in time to watch FOX and Friends. 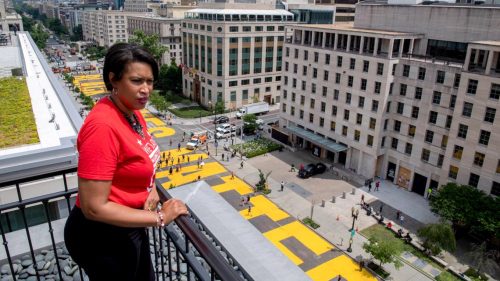 The Mayor is tough. She outfoxed Trump, and boxed him in. If their confrontation ever got physical I have her as a prohibitive favorite.

The Trump Convention will be a celebration of Trump Is Tough. We’ll see clips of the Trump Strut, the slow walk, waving the clenched fist. Meeting with other so-called tough guys like Crown Prince Muhammad Bin Salman. What a sick joke. President Bone Spurs meets with Prince Bone Saws.

When you see Trump’s slow walk strut, think of a real tough guy, a Mench, Robert Mueller. When Mueller got out of college, he went down to the Marine Corps Recruiting Office and was turned down because of bad knees. Nine out of ten would have breathed a sigh of relief. No Viet Nam. Bob Mueller rehabbed, went down to see the Marines a year later and made it in on the second try. Viet Nam. Highly decorated, absolutely. Followed by 12 years as FBI Director, appointed by Bush extended by Obama, confirmed unanimously by the US Senate, twice.

When asked what he was most proud of in his illustrious career Bob Mueller replied “the Marine Corps deemed me worthy to lead other Marines.” Now there’s a guy who could wear a Make America Great Again Hat legitimately. Not like the other stiff.

So, as you watch the Republican Convention, every time you see Trump, think Mueller. Trump is what can happen to a country, a society, a people if they don’t pay attention in the fullest sense of the word “attention”. Attention is what Benjamin Franklin was talking about when he responded to a question about what the Constitutional Convention had produced. His answer, for the ages, “A Republic if you can keep it.”

It’s on everybody. We didn’t keep it. But we can get it back. Our wonderful Republic. What else have you got to do that’s more important?

Mr. Big, may not be at the Convention. He’s 87 years old and, with the threat of Covid, he may not want to risk travel. He can afford the trip. He’s got $35 Billion in his wallet and access to 18 planes that he and his company own. He is the single most powerful private citizen in the US and Israel but he can’t get his name in the paper or mentioned on TV in the USA. People who are reasonably informed on public affairs have never heard of him.

That should be unbelievable, even funny. It’s not. It’s pathetic. It’s proof of the cowardice of our chickenshit press. Scared of their own freaking shadows, with precious few exceptions.

Why is the Press so timid regarding Sheldon Adelson? Let’s see, he’s Jewish, a ferocious supporter of all things Israel and a proponent of “preemptive” military action against Iran. He is also the biggest contributor, by far, to Trump. He has no problem writing checks in $100,000,000 increments. Whoever’s second is not even close.

Say all of that out loud on TV or in the papers and sensitive folks get uncomfortable with the mention of Jew, Money and Power in the same sentence, and assume ugly intent. Stick to demonstrable facts, and one is well within the tradition of fair comment. Members of the Press, who are not willing to take criticism, should get the hell out of the way and make way for someone who is. Hat’s off to Chris Matthews who has mentioned Adelson, but is no longer on MSNBC. Isn’t that special?

Here is why Sheldon Adelson is very relevant right now. Trump needs a game changing gambit to seize victory from the jaws of defeat in the election. Adelson is on the record favoring a “preemptive” hit on Iran. Creepy, obsequious, Mike Pompeo, is Adelson’s man in charge of getting Adelson the war he wants. Pompeo has been mucking around up at UN, grandstanding about more sanctions against Iran. It’s all show to give Trump an opportunity to ridicule the UN (always a winner in some quarters); ridicule the Europeans (who fought and died with us in Afghanistan after 9-11) and lay the foundation for an actual hit on Iran, “because no one else is willing to save the world.” Sick.

Timing? About the beginning of October might be a good time for a war, if you are Trump, and you’re trying to win an election, and you have Trump’s values. A couple hundred thousand dead Iranians, who cares? They’re easy pickings right now with Covid, and crippling sanctions. Netanyahu will be happy as a clam. Everybody loves Netanyahu, don’t they?

If we had a free and courageous press, they’d be all over this looming horror show.