Let’s go to War first. Sheldon Adelson would prefer it that way. He’s 87 years old and Trump is his last best chance to destroy Iran.

I’ve played the clip of Sheldon at Yeshiva University twice. Take another look. According to Adelson, the way to “negotiate” with Iran is devoid of niceties, “you drop an Atomic Bomb in their desert and you tell them the next one is in downtown Tehran.”

You should have seen that clip many times on the so-called “progressive channel”, MSNBC. Progressives are for peace, right? I mean if they’re not that would mean the Right is correct in saying “they’re hypocrites.”

Back to Adelson. Sheldon plays a number of roles. He is the single most powerful private citizen in both Israel and the USA. He was Trump’s largest financial contributor in 2016 and the largest contributor to the Trump Inaugural Committee. He gave $75 Mil to Trump last week, and coincidentally, Trump has asked for the next debate to be limited to Foreign Policy. In other words, Iran.

Are you telling me that Sheldon Adelson did not have a conversation with Mr. Donald Trump before releasing that $75 MIL? Take it from me, they had a few. And, they talked about Iran. And, Sheldon wants what he’s always wanted. The sole remaining questions are how much of a beating will satisfy the blood lust of the Right Wing of the Israel Lobby and how much of a beating will Trump agree to administer.

You should be hearing this story from the flag ship of the progressive movement, MSNBC. Specifically from their ratings leader Rachel Maddow. By custom and tradition, the ratings leader of the cable lineup leads by example. It’s her job to do the story that cries out to be told even though it makes ownership (Comcast) and some viewers (strongly pro-Israel) uncomfortable.

Rachel Maddow has been an abject failure on any story that might find something wrong with Israel or right about Iran. She takes no risk whatsoever. She is the polar opposite of William Safire, formerly of the Times, who would counsel new reporters “not to kick someone when they are down. Kick them when they are up, it takes guts.”

So, when you hear Trump at the final debate announce new punitive deadly and totally unnecessary steps against a down and bleeding Iran ask yourself, what’s up with the people we call “progressive.”

DICK LEBEAU CAN WIN IT FOR BIDEN 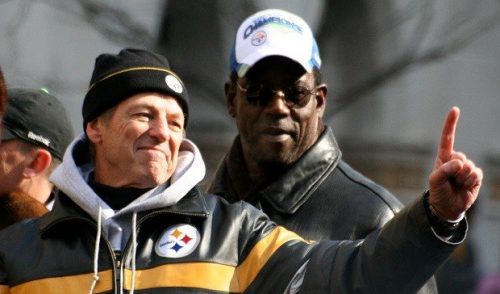 What a guy. Hung out with Lem Barney and Dick “Night Train” Lane.

Dick LeBeau is 83 years old. He played Professional Football and coached Professional Football until he was 81. In short, he is the guy that every other guy wishes they were. Cool as the other side of the pillow without ever trying. Capable of bringing tears to the eyes of tough black and white football players by reading from memory “Twas the Night Before Christmas” to a room full of players every year on the last Saturday Night before Christmas for years, in Pittsburgh and elsewhere.

Dick LeBeau is the kind of guy that if you walked into a bar in Pittsburgh, Detroit or Youngstown…a workingman’s bar… and said “Dick LeBeau” it would change the room. And, if you got it right you wouldn’t need money and if you got it wrong money wouldn’t help you.

When the Steelers last won the Super Bowl, the whole organization went to the White House. Barack Obama, who knew a thing or two about the right people to hang out with called out “Is Dick LeBeau Here?”. Dick gave a cheerful and totally right on the money “Yessir.” And got a great hand. Up until he was inducted into the Pro Football Hall of Fame a few years later he counted having Obama recognize him at the White House as his proudest moment.

Let me get to the point. Someone with Biden or Obama has to call up Dick LeBeau and sign him up to go to Detroit and Pittsburgh and put PA and MI in the First National Bank of Biden.

It goes like this: Obama calms the crowd and introduces Le Beau. Le Beau tells a couple of stories and gives it back to Obama who revs the crowd up and Joe finishes. Four stops in PA then four stops in MI. Two Days. The two states will say in unison, “any friend of Dick LeBeau, is a friend of mine.”