Football fans will recognize the title from Al Davis, longtime owner of the Oakland Raiders. Joe Biden should have that phrase painted in bold letters on the ceiling in his bedroom so its the first thing he sees when he wakes up in the morning…which damm well better be before Six AM.

You got work to do, Joe. Politics ain’t beanbag. The other side is coming for you. You’ve said you’re a fighter. Show us.

Here’s the 2016 Map. It’s Hillary’s loser’s map but, I’m sure you can see a win hidden inside. You should know you won twice with Obama. 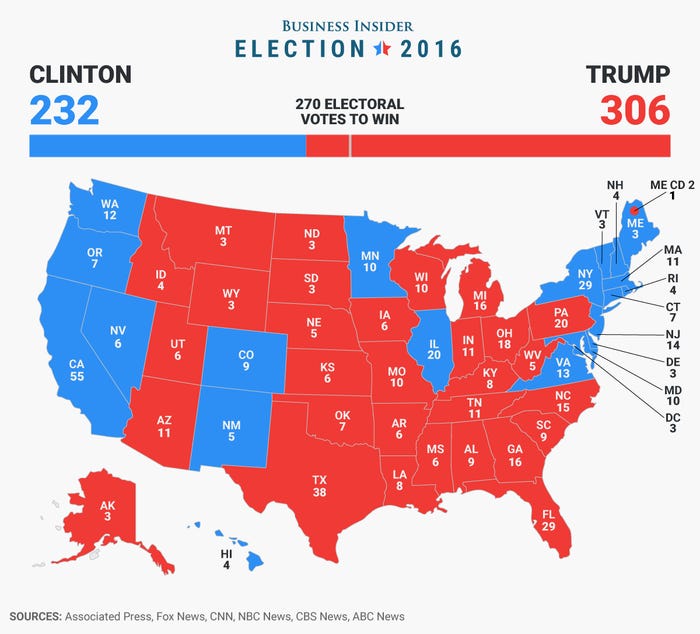 Joe, you hold what Hillary won and you need to pick up 38 Electoral Votes to win the Election. Are you telling me you can’t win PA? You grew up in Scranton, you got Ed Rendell, two term Governor helping you and you can drive to PA from Wilmington in 15 minutes. I booked it for you. Don’t worry about it. PA has 20, now you need 18.

Next door is Ohio, 18 electoral votes. Isn’t that special. You and Obama won it twice. Hillary lost it by 8 points. That’s ridiculous, absurd and insane. There may have been a worse candidate than Hillary, but I doubt it. Let’s look elsewhere for our 270 Plus No Matter What Block.

Michigan should always be Democrat. You and Obama won it twice. Hillary lost it by less than half a point. I know you’ll go and fight for it. You’re their kind of guy and you got a great Governor, Gretchen Whitmer, and former Governor, Jennifer Granholm, pushing you over the top. They have 16 electoral votes leaving you two short in your 270 Plus No Matter What Block.

Let’s go South. You and Obama carried Florida twice. Hilary lost it by a little more than 1%. You gotta have it. It’s 29 electoral votes. Its non negotiable… “Just win Florida, Baby.” You should. I have it on good authority that a big block that traditionally goes Republican in Florida, Cuban Americans, have had a bellyful with the other guy. You have to have a running mate that helps in Florida. I’m writing it down. Biden wins Florida. Its in your 270 Plus No Matter What Block. You’re over the top, by 27 electoral votes.

You’re not done. Let’s bury him. You can win OH, WI and Iowa. You know that. You and Obama won them twice. That’s 34 more electoral votes you’re up to a 61electoral vote win. Add very doable NC and GA you’ve got a 92 electoral vote win. Enough so that if the other guy starts with the blah, blah, blah the American people will collectively laugh in his face.

Politicians often talk to audiences saying “I can’t do it without you.” In this case, Biden versus Trump, it will be literally true. We know Joe. He’s got a good heart, he’s decent, experienced and has good common sense. He’s not slick or glib. And most of all he knows that the job is not about him. It’s about us.

He will view the job like Obama viewed it. As a custodian, doing the best he can for us for the time that he is given.

We’re down to less than 100 days. You got anything better to do?