Kennedy drew 60,000 at 3AM in Waterbury; Obama, 150,00 in Denver; Trump 6,200 in Tulsa, including staff, secret service, assorted flunkies, wannabees, and, supernumeraries. That’s about right. The universe is starting to make sense.

The Trump Act is getting stale and tired. The “cover story” of shaking things up does’t wash. Deep state, Antifa (anyone have their phone number?) fake news. It’s all bull and boring to boot. A cover for incompetence that knows no bounds. And, drama. Always drama and lies, the two constants in Trump World.

There’s a New Base in town. The old base, Trump’s, is getting smaller by the day. They showed what they have in Tulsa. Dozens and dozens of them. The New Base is united by their contempt for Trump. They started to coalesce around Trump incompetence on Covid. It took a giant leap forward with the nine minute slow motion execution of George Floyd, under the knee of former Minneapolis Police Officer, Derek Chauvin. It continues to grow as we speak.

There is a tremendous hunger out there in the country for simple virtues: honesty, empathy, fairness, competence. Enough with the slow motion walk across the Park for the picture with the Bible. He got his picture, but the Mayor of Washington, Muriel Bowser, seized the moment and more by painting in huge block letters BLACK LIVES MATTER, on 16th St, visible from space, and, most importantly, from the Residential Quarters of the White House.

People are angry, motivated and paying attention. A matter that, in normal circumstances, would get medium level press attention, the replacement of a prosecuting attorney in one of the 90 federal districts in the country, had the full attention of the Country. Attorney General Barr tried to remove the Acting United States Attorney for the Southern District of New York Friday night at 9PM by issuing a statement that the incumbent, Geoffrey Berman, was leaving. Mr. Berman issued a contradicting statement that he wasn’t leaving and that he would stay “until his successor was nominated and confirmed.”

My comment on one of the news stories in the Times below: 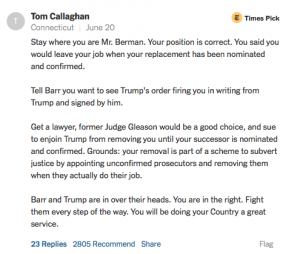 There are 134 days left until the election. We are not anywhere near end game with Trump. But, we can see it from here. Joe has to get better and show us he’s better. He needs a great number two. The most capable among those being considered is, in my opinion, Elizabeth Warren. She’s super smart and has a ton of energy.

If Trump sees a loss coming my bet is he’d try to make a deal with Pence to trade a resignation for a Nixon type pardon. Pardon on any and all Federal crimes committed by Trump up to the date of his resignation.

Of course all this is idle speculation. If Joe can’t find his way out of the basement, remember who his wife is and who his sister is, and give a speech that can be understood.